On September 25th of 1923, my grandmother, Harriet Magdalene Hamm, was born on the kitchen table of a house in Richmond Hills, Queens. She was raised in Floral Park, Long Island. She later went to school to become a nurse and met a young man, Chuck, from the neighboring boy’s college. She and Chuck became engaged and they would double-date with Chuck’s fraternity brother, Conrad and his girlfriend at the time. When Chuck was about to leave for the service, he floated the idea to my grandmother of an open relationship – open purely from his side of course. Not only did she turn down that idea, she promptly dumped Chuck. She wrote a letter to Conrad, who she had become friends with, telling him that she was no longer engaged to Chuck and she supposed he wouldn’t want to continue to be friends with her.

My grandfather, Conrad William de Fiebre was born January 19th of 1924 in Jamaica, Queens. He later moved to Cranston, Rhode Island and then Norwich, Connecticut. While at college, he and his girlfriend at the time went on double dates with his fraternity brother Chuck and Chuck’s fiancée, Harriet. He and Harriet hit it off and became friends themselves. One day, Conrad, in Basic Training, got a letter from Harriet announcing that she had broken off her engagement to Chuck and that she reckoned he would no longer want to remain friends. Conrad replied that he saw no reason that they had to end their friendship on account of her broken engagement with Chuck. From my grandfather’s account of his life:

“Mail finally caught up with us, and one letter was from Harriet. She told me she and Chuck had ended their engagement and she assumed I wouldn’t want to be writing to her again. She was wrong. Mail Call was the high point of what usually was an unpleasant day and the more letters you got the better life was. I replied that I was sorry that the engagement hadn’t worked out but that we had been good friends and I saw no reason for us not to continue to correspond.”

Conrad and Harriet continued to see each other as friends. One night when he was on leave from Basic Training, they were out at a movie and a love song came on. They suddenly looked at each other and realized they were in love.

“Most movie houses in the big cities were large and in addition to films also had a vaudeville show. We sat up in the balcony where the seats were cheaper and smoking was permitted. We never could remember the film but the stage acts included the usual juggler, tap dancer, etc. as well as a featured star or band. That week the band was Jimmie Dorsey. The vocalists were Bob Eberle and Helen O’Connell. They sang several of their record hits, such as Tangerine and Green Eyes. Then they sang one that Harriet and I had never heard, but as soon as we heard the lyrics (in Spanish) we knew what they meant. It was Besame mucho (Kiss me very much). We looked at each other and suddenly realized we were more than just good friends. We were in love!”

In subsequent years, Harriet and Conrad moved for his schooling and career many times – Wisconsin, Delaware, the Chicago suburbs and finally Columbus, Ohio – while raising their growing family of six boys. But when my cousins and I met up in NYC recently, we were focused on seeing some of the old family sights from our grandparent’s youth.

First, we took the train out to Floral Park, where we found the house our grandmother grew up in. Then we found Our Lady of Victory. The church has been almost completely redone since the 40s, but it’s still standing and the priest took us for a tour. Afterwards, we stopped at a local watering hole and a few of us had Grandma and Grandpa’s favorite drink – whiskey Manhattan on the rocks.

We were seven – the children and grandchildren of the six boys Conrad and Harriet had. We call ourselves G3 for Generation 3, although my nephew Matt has been folded into the same generation as my brother as my brother has been the only one to procreate and Matt is now going on 18. When we weren’t family pilgrimaging, we were eating/drinking lots of yummy things, playing tourist, being “that annoying table” at restaurants and just enjoying each other’s company. As my parents said when they saw the pictures, I hope that Conrad and Harriet were watching somewhere and smiling down on the craziness they created.

Prost to cousins and the two people who started it all

The house our grandmother grew up in 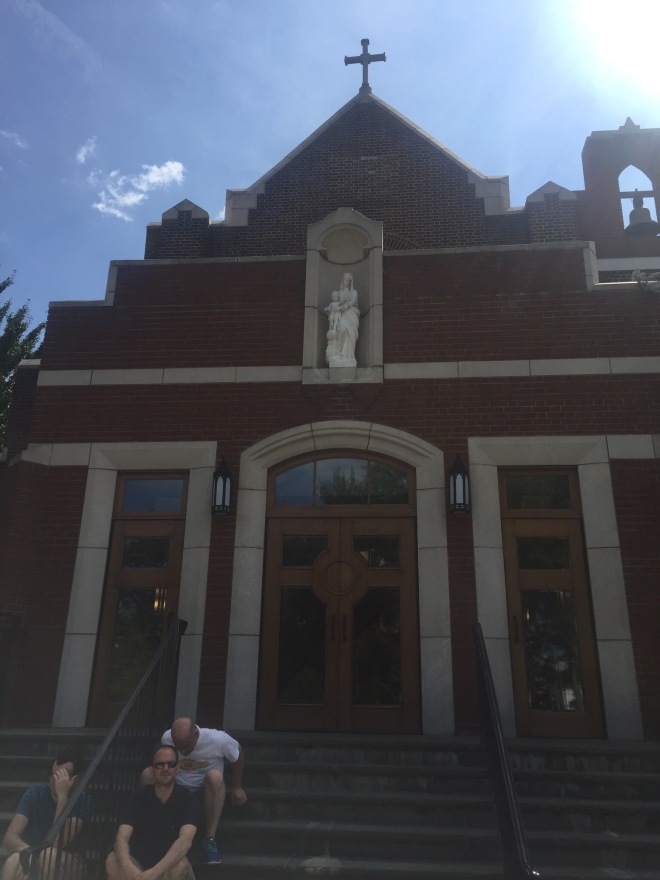