First off, I’d like to put in a disclaimer that I’m not a scientist, I just sometimes play one on the internet. So if any actual scientists (Uncle Chris? Aunt Nancy? Dr. Kelly?) would like to weigh in, I’d love that.

I have a type of cancer known as Her2+. It means that my cancer overexpresses a protein called Her2. Her2+ Cancer is a double-edged sword. It’s very aggressive but also has provided a great target for some of the most successful Oncology drugs (with Herceptin leading the pack) of the past 20 years.

But as successful as these Her2 targeted therapies have been, there are still some mechanisms of resistance. As someone who has Her2+ treatment resistance, I was really interested in the session about it at the Advanced Breast Cancer Conference in Lisbon. And it turned out to be my favorite session of the conference – so much information.

So what drives Her2 resistance? 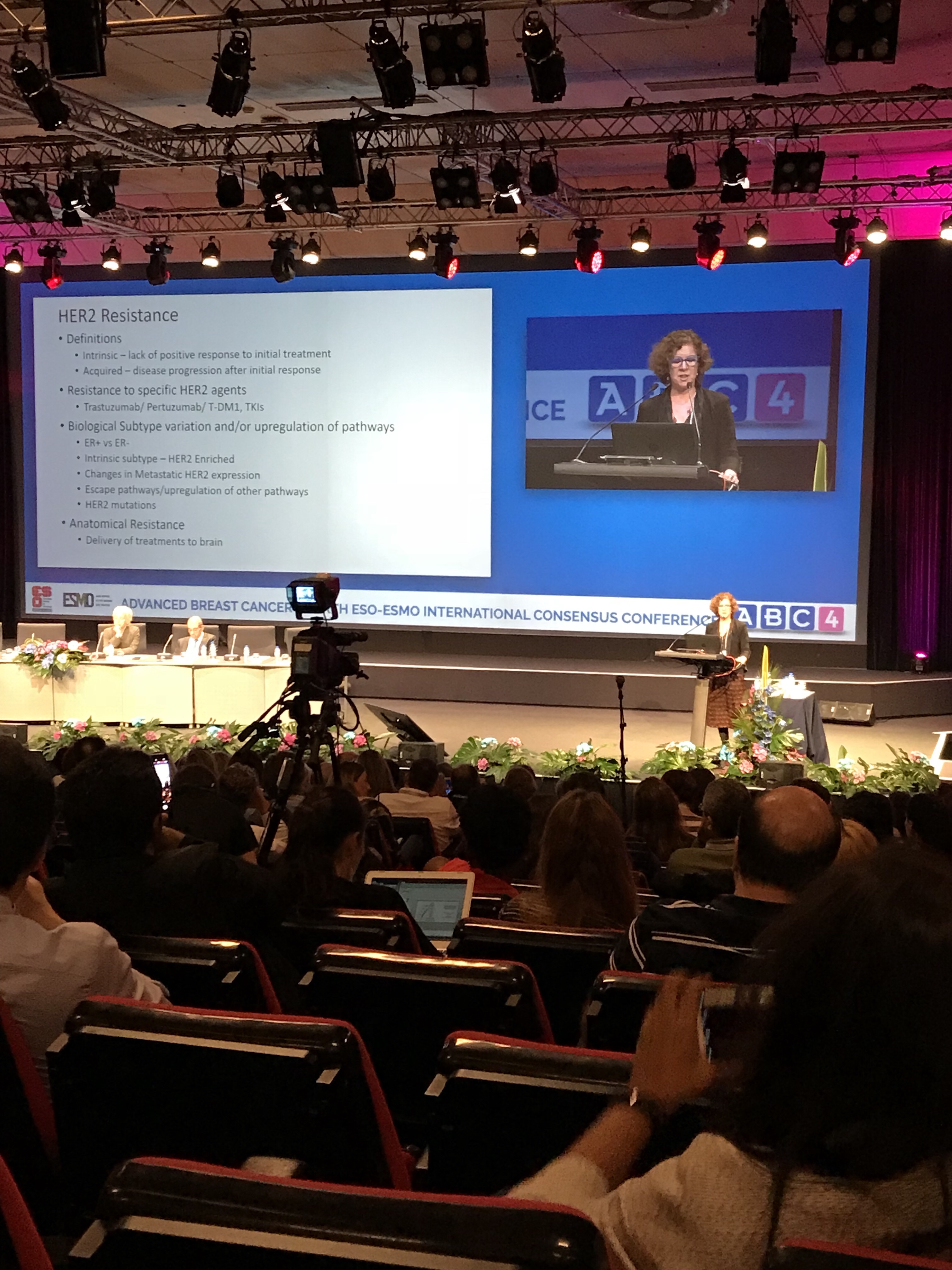 As you see, there’s intrinsic resistance. A lot of Her2+ patients are given what is called neoadjuvant chemotherapy. That means chemo is given to shrink the cancer before surgery is performed. A regime of chemo and Her2 targeted drugs are given and then surgery is performed. How much the tumor and/or involved lymph nodes shrank is a pretty good indication of how well treatment worked. Best case scenario, no cancer is found at the time of surgery and worst case scenario, the cancer grew. Most people fall somewhere in the middle (I did, with most of my cancer gone with chemo but not all of it). How well the tumor and lymph nodes responded to chemo is an indication – although not a guarantee – of how well the treatment cleaned up floating cancer cells in the rest of the body. And a lack of response can be associated with intrinsic resistance.

Acquired resistance happens as tumors grow and spread. They acquire mutations that make the cancer more resistant to treatment. That is why metastatic cancer is so hard to treat – it is constantly evolving, developing new mutations and finding ways around the current treatment.

Let’s look at this graphic of common mutations in metastatic Her2+ cancer. See the blue (TP53) and orange (pik3ca) slices of the pie? They are the two most common mutation in Her2 cancer and per my a Foundation One report, I have both, lucky me. (Which is why I don’t understand the part where they can’t be mutually exclusive, guess I wasn’t paying close enough attention during that part).

Here’s the fun part. Someone can have a mutation in one tumor and not have it in a different tumor. In fact there can be different mutations in different slices of the same tumor. So while targeting specific mutations is a good strategy, there’s still lots of obstacles to overcome there.

Another problem is treating Her2+ cancer like a single entity. Her2 cancer may contain receptors for hormone positivity or may not. Her2 can be expressed at different levels or in different ways. The invention of Herceptin was a brilliant step and has saved or prolonged countless lives. But we are still light years from fully understanding the disease.

Look at these charts. Researchers have identified four molecular subtypes of breast cancer – Luminal A, Luminal B, Her2-enriched and basal-like. I had been under the impression that:

This is getting long and we haven’t even gotten into the last variable – that Her2 likes to go to the brain and limited treatment can bypass the blood brain barrier. But I think that will be a second post. Bottom line, Her2 positive cancer is one of the most treatable subtypes and much progress has been made and is continuing to be made. But there’s still many mysteries to unlock as we go forward.