You may have read a headline or two in recent years in regards to whether mammograms actually save lives or do more harm than good as they often lead to overdiagnosis. I touched on this just last week (item #3).

One of the problems is breast cancer doesn’t always present in a nicely diagnosable way. Some cancers grow rapidly, presenting and doubling in size between routine screenings (hi, that would be mine).

Some breast cancers present as a rash, which can turn out to be Inflammatory Breast Cancer, a rare and very aggressive type.

10-15% of breast cancers are Lobular. This type is much harder to see on a mammogram. In addition, it tends to form a thickening instead of a discernible lump. When this “journey” (gag) began, I was convinced to act immediately because of a blog I found of a 29-year old who was diagnosed Stage IV from the start due to misdiagnosis – and she had lobular breast cancer.

Lobular actually tends to be very responsive to hormonal therapy and has a slightly better prognosis than the much more common ductal in the early stages. But many cases are misdiagnosed until they are more advanced. My roomie from the MBC conference two years ago has lobular and was misdiagnosed for FOUR years despite getting screened at a high-risk clinic.

Over the weekend, I received a copy of a letter from my cousin that was written by my Grandma de Fiebre to her doctor back in the 1980s. Her story strongly mirrors the story of my blogger friend mentioned above. Grandma’s cancer as far as we know, never metastasized, although she was in pretty bad shape when she died 15 years later, both because of Parkinson’s and because of the long-term effects of the cancer treatment. The shameful thing to me is that in the 30 years that transpired between Grandma’s diagnosis and my blogger friend’s, there have been far too little awareness among medical professionals as to how different breast cancers present.

Am I saying don’t get mammograms? Of course not! It’s the best we have and they probably save some lives, if not the majority. But we should also be pushing for better screening AND better treatment for those who screening fails for. We should stop putting all our faith in one screening tool. And we should be stopping the blame game of those whose cancers are not detected early. 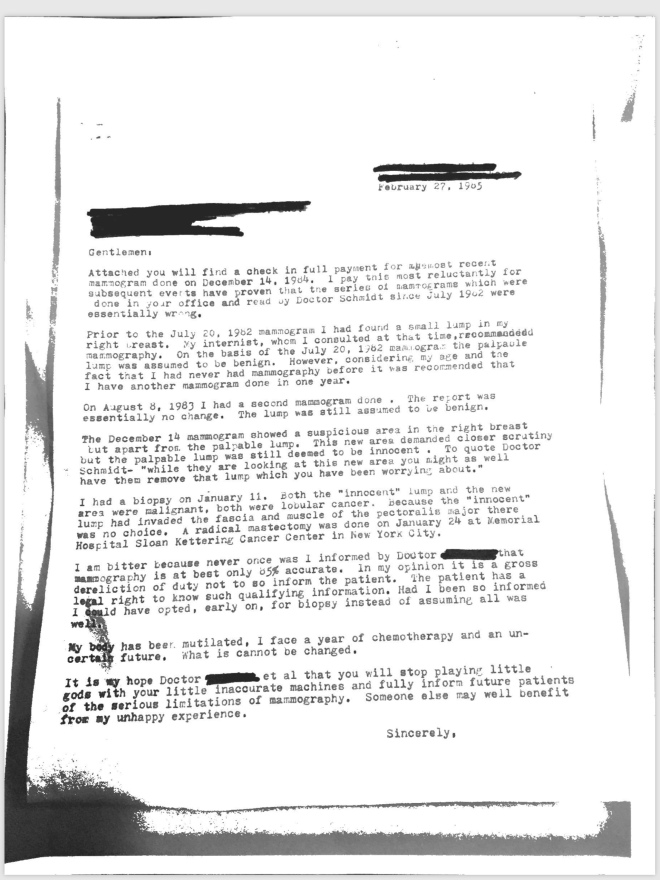 Grandma’s letter. She was a cancer badass. I clearly got it from her.