My MBC friend, Jennifer, has been admirably open and honest about her brief foray into alternative medicine after being diagnosed with breast cancer. Here is her story (bolded parts mine).

"Alternative Therapy vs Conventional Therapy keeps coming up. I want to share my experience, in hopes it may help someone.
I was dx stage 3b ductal carcinoma in 2012. I had 3 tumors in the right breast. I was advised to have a double mastectomy, chemo, and radiation right away. I had starting juicing and looking into holistic therapy before my dx, so I was convinced alternative was the only way I would survive. I was scared of chemo, I believed the side effects and the chemo itself would kill me faster than the cancer. So I ran away(literally) from conventional treatment. I enrolled in a 10 day crash course on Raw food, cleansing, enemas, supplements, oils, and meditation. I changed my diet. I ate 100% vegan/organic for 18 months. I drank wheatgrass and even did wheatgrass enemas daily. I used all organic oils and supplements. I drank essiac tea. I meditated daily and practiced gratitude. I used thermography instead of scans. I felt pretty good, looked better than ever, and was convinced I was turning the cancer around.
I still progressed to stage 4. So did my friends who took the class with me. I am the only cancer patient who was in that class who is still alive! That is scary as hell. Why am I alive? Maybe its Gods intervention, or maybe its because I decided to get a catskan when I noticed my biggest tumor was not shrinking. Thermography had lied to me, telling me I was regressing, when in fact, I was progressing. So I decided to get a lumpectomy, instead of a mastectomy, and I kept on eating Raw and using holistic therapy .( I still had to get a mastectomy in 2015 due to a second cancer in same breast) I did start chemo ,because I knew in my heart I would die if I did not. I started to realize the oncologists and Drs are not the enemy, as I had been taught. These people are actually trying to save my life. I realized some of the people I believed were helping me were actually taking advantage of me, and profiting from watching me die.
I no longer eat Raw, or juice often. I do believe there are benefits from this lifestyle, but I personally dont believe the effects are enough to counter act the poisons of the life extending chemo I take every 3 weeks for the rest of my life. Yes, chemo is hard. It tears me up physically, its difficult to endure mentally. But Im still alive, fighting for better treatments for all of us, because the chemo has given me more time. And for that Im grateful.
I beg cancer pts not to buy into the documentaries, the very expensive and misguided wellness center programs, whhich train you on how to reprogram your body. It saddens me to watch friends fly all over the world to get thier blood reoxygenated or do these crazy treatments. If you are willing to chance doing that, then please know in my opinion, you are going to die feeling so much regret. And probably broke.
Prayer and gratitude are very important, but a positive outlook alone will not stop the cancer from spreading.
And everyone please stop spreading the cruel lies that alternative medicine will save cancer patients. Stop telling us there is a cure, because there is not. You are actually encouraging cancer patients to committ death by suicide, by using alternative therapies alone.
You may think I caused my own progression by not doing chemo right away. Who knows, maybe so! I personally believe I would have progressed anyway as I was borderline at dx. I do know this.. I have tried both, alternative vs Conventional. I know without a doubt Conventional is the way to go. And more research and better treatments with less side effects is the only way to stop the argument of holistic vs conventional."

I just spent last evening with Jen and she is doing well. Yes, she has side effects from treatment. But she here, raising her girls and raising awareness both of metastatic breast cancer and of the harm of following alternative medicine. In fact, she is No Evidence of Active Disease (NEAD). NEAD is what Stage IV cancer patients aspire to. It doesn't mean the cancer is cured, but it does mean the cancer is so well-controlled that it is not visible on scans.

And before you accuse me of being a shill for Big Pharma, consider this: 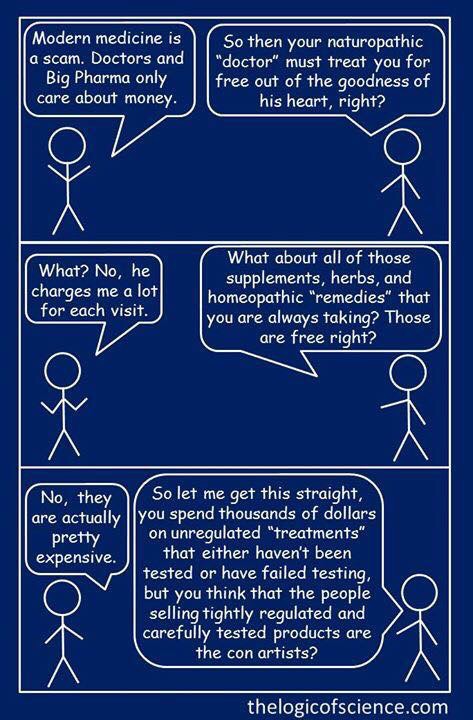